On the  2nd of August 2016  Volker Kufahl, the art director of the FILMKUNSTFEST MV and Chief executive officer of the FILMLAND MV gGmbH, was invited by our international fellows to the European Film Festival (SEFF) in Szczecin, Poland, where he was asked to present the ‘Schweriner Film festival’ to the people of the Baltic metropole. Due to the lovely summery temperatures, the presentation took place outside, in the castle yard of the former residence of the Pomeranian dukes, right in the heart of Szczecin’s Old town. Volker Kufahl showed a variety of contributions from the short film competition, that where shown in the FILMKUNSTFEST MV 2016.

The „German evening“ in cooperation with the partner festival from Schwerin was part of the summery Pre-view of the SEFF, which officially takes place from the 15th-24th of October in Szczecin. Volker Kufahl was delighted by the huge demand and resonance of the Polish audience, as well as by the hostility of the Szeczecin Fellows, inviting him not only to a city tour, but also to become a member of the SEFF panel this year. This visit is to be seen as the return visit of the partner festival, which had been presented to the German audience on 5 May 2016 by the two polish festival directors, Dr. Bartosz Wóijcik and Claudia Dietrich. Back then, you could see a variety of short films, in cooperation with the Friedrich-Ebert-Stiftung, on the one hand, and an open Discussion on the current situation regarding Polish cultural policies.

The cooperation between the two film festivals, in Schwerin and in Szczecin, „Film festivals in Contact“, is one of 25 civil-society-oriented projects, that were chosen to be promoted by the Foundation for Polish-German Cooperation (SdpZ), on the occasion of the 25th anniversary of the signing of the agreement upon “good-neighborly relations and friendly collaborations” in 2016. 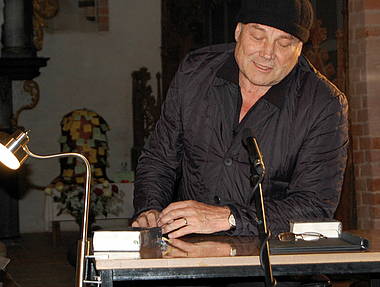