The deadline for film submissions has changed accordingly and is now 26 June 2022 (directly possible on the FILMLAND MV homepage).

Five juries choose the FILMKUNSTFEST MV award-winners, while festival-goers select the winners of the audience award.

1. Eight different awards are given in the feature film competition. A five-member grand jury of professionals from a range of film industry professions and trades (directors, screenwriters, actors, cinematographers, sound editors, film editors, etc.) decides six of them.

Feature film viewers decide who wins the audience award via votes cast following the screenings; the winner is determined at the end of the competition.

2. Three film critics who are usually from the German-speaking countries Germany, Austria and Switzerland and are members of FIPRESCI (International Federation of Film Critics) award a further distinction for a feature film in competition.

4. Three representatives of the film industry also decide the winner of the award for best short film in the short film competition.

5. A youth jury consisting of several school pupils from Schwerin and the surrounding area under the guidance of trained media educators decides on the award for the best film for children and young audiences.

A comprehensive list of awards and the corresponding prize money can be found under the rubric Awards. 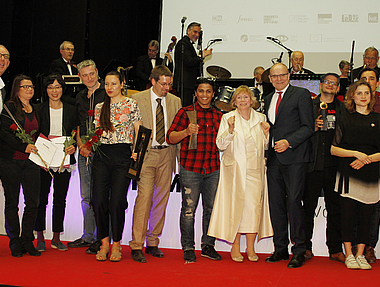