The deadline for film submissions has changed accordingly and is now 26 June 2022 (directly possible on the FILMLAND MV homepage).

The festival's organisers confer the honorary Golden Ox award for outstanding contributions to German cinematic culture. The organisers and the festival's patron, the minister-president of Mecklenburg-West Pomerania, present it at the awards ceremony.

The list of previous honourees can be found here.

FILMKUNSTFEST MV in Mecklenburg-West Pomerania's capital city of Schwerin is considered one of the most important film festivals for up-and-coming German-language filmmakers. Ten productions from Germany, Austria and Switzerland vie for the festival's top prize in the feature film competition, the Flying Ox (der fliegende Ochse), and seven other awards.

The Flying Ox is the grand prize in the FILMKUNSTFEST MV feature film competition. The Mecklenburg-West Pomerania State Chancellery endows the award with 10,000 euros in prize money.

Winner film of the 29th feature film competition in May 2019 was "System Crasher" by director Nora Fingscheidt.

The NDR Director's Award goes to a feature film director and is endowed with 5,000 euros in prize money by regional radio and television broadcaster Norddeutscher Rundfunk.

The DEFA Foundation award for up-and-coming talents promotes young German filmmakers, directors and screenwriters whose work has made an innovative contribution to how film engages with the present day. It is endowed with 4,000 euros in prize money and is awarded by the DEFA Foundation in Berlin.

Studio Mitte Filmpostproduktion in Berlin and Steinberg Creativity First endow the award for Best Music/Sound Design in a feature film with 4,000 euros in donated prizes.

LOTTO Mecklenburg-West Pomerania endows the award for best dramatic performance in a feature film with 3,500 euro in prize money.

The Stadtwerke Schwerin endow the award for the best up-and-coming actor with 2,500 euros in prize money.

After the feature films have been screened audiences are given assessment cards to vote on the film entries. At the end of the competition the film with the highest rating is determined. The regional newspaper Schweriner Volkszeitung endows the audience award with a prize of 2,500 euros.

The award from German-speaking members of FIPRESCI (the International Federation of Film Critics) has been conferred by a jury since 2011 and includes no prize money. It is awarded by three members of the International Federation of Film Critics who are generally from German-speaking countries such as Germany, Austria and Switzerland.

The award for best documentary in competition is endowed with a 5,000 euro prize from Sparkasse Mecklenburg-Schwerin. A three-person jury of experts awards the prize, which was first given in 2014.

Sparkasse Mecklenburg-Schwerin also endows the award for the best cinematography in a documentary in competition with a prize of 2,500 euros.

Best cinematography in a documentary

Short Film in Competition, "LEO" and other awards

The City of Schwerin endows the award for the best short film in competition with 4,000 euros in prize money. A three-member expert jury confers the award.

12. LEO – the award for best film for children and young audiences in competition

Furthermore, FILMLAND MV, the City of Schwerin, the Evangelical youth organisation and further partners are committed to encouraging the participation of children and young people from socially disadvantaged families for whom it is nearly impossible to visit the festival. A second screening location in the Campus am Turm civic centre is intended to provide a place to overcome barriers and allow these children and young people to participate in the festival.

The WIR Diversity Award is given to a film entry from across the festival programme, so expressly not solely to entries in the competitions. Supporters of the initiative WIR. Erfolg braucht Vielfalt (WE. Success requires diversity) select the award-winning film. This non-partisan, non-denominational, cross-societal initiative promotes "a free, democratic and cosmopolitan Mecklenburg-West Pomerania based on mutual respect and understanding".

The winning films from the short film night receive an award and an official certificate with no set prize money; streichen: however, where applicable, they may receive prize money donated by sponsors. The award-winners will be determined at the end of the event via an on-site audience vote.

Short Film in Competition, "LEO" and other awards

The scholarships are primarily funded by the Ministry of Education, Science and Culture and in part by Künstlerhaus Ahrenshoop e.V. 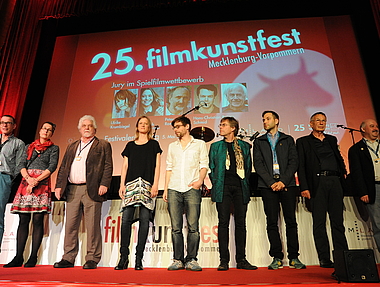