Résumé of the 29th FILMKUNSTFEST MV

While SYSTEM CRASHER wins the Fliegender Ochse (Flying Ox, with reference to the ox in the coat of arms of Mecklenburg-Western Pomerania), main award of the feature-film competition, actor Katharina Thalbach takes home the Lifetime Achievement (Golden Ox, the honorary award of the Schwerin film festival).

Thanks to a festival programme that was characterised not only by many female filmmakers  but also by a powerful range of films, the 29th FILMKUNSTFEST MV was eventually visited by 19,200 spectators having watched 120 films. Hence, this year's attendance clearly exceeded the previous record of approximately 18,000 visitors in 2017.

”The 29th year in the history of the FILMKUNSTFEST MV has surpassed all our expectations,” the festival’s Artistic Director Volker Kufahl said. “We are truly pleased that both the audience and the juries appreciated the programme we had thoughtfully put together and which comprised many films revolving around topics relevant to society. I am particularly glad that our Focus Ireland section attracted such an overwhelming interest”.

After a suspense-packed start with the German premiere of the psychological thriller film GRETA directed by Irish grandseigneur Neil Jordan (THE CRYING GAME, 1993), the number of cinemagoers remained on a constantly high level.

1,000 spectators alone attended the two film concerts along the screening of Charlie Chaplin’s silent-film classic THE GOLD RUSH from 1925. The Mecklenburg State Orchestra, conducted by Martin Schelhaas, performed Chaplin’s score to the film.

Along with the honorary award for Katharina Thalbach, 11 other prices were conferred during the festival’s award ceremony at the Mecklenburg State Theatre. The German film SYSTEM CRASHER won the feature-film competition’s Best Film Award, the Fliegender Ochse, the FIPRESCI Critics’ Choice Award, the Best Music and Sound Design Award as well as the Advancement Award of the DEFA Foundation. The Austrian film THE GROUND BENEATH MY FEET, partly filmed in the city of Rostock, won the NDR Best Director Award, actress Valerie Pachner received the Best Up-and-coming Actor Award.

The German entry LET THE BELL RING about an American boxer, directed by Christin Freitag, won the Best Documentary Feature Award. Daniel Samer took home the Best Cinematography in a Documentary Feature Award for his camera work in Stephan Hilpert’s CONGO CALLING. The Best Children’s and Youth Film Award LEO was won by the imaginative adventure film CLEO set in Berlin, directed by the German director and screenwriter Erik Schmitt. The Audience Award was won by Sherry Hormann’s A REGULAR WOMAN. On Sherry Hormann’s behalf, Christoph Ott of the film’s distribution company NFP marketing & distribution accepted the award. Just like many other festival visitors, Ott valued highly the selection of competition entries and added that the FILMKUNSTFEST MV “showcases excellence”.

The 13 guests from Ireland were particularly chuffed about the curiosity and open-mindedness of the Schwerin festival audience, with the German-Irish author Ralf Sotscheck, who contributed a reading session, the Irish photo journalist Derek Speirs, whose exhibition titled CHILDREN can be visited in Schwerin until the end of May, Don O’Mahony, the curator of the Cork Film Festival short-film programme, actress Hazel Doupe (FLOAT LIKE A BUTTERFLY) and her fellow actor Dafhyd Flynn (MICHAEL INSIDE) leading the way.

Some of the 9 feature films and 15 short films from the Focus Ireland section of this year’s FILMKUNSTFEST MV programme made specific reference to the civil war in Northern Ireland, such as the documentary feature I, DOLOURS directed by Maurice Sweeney about the IRA leader Dolours Price that premiered in Germany at the festival. During the film’s Q&A talk, Sweeney expressed his concern that Northern Irish who have not come to terms with the traumas the conflict in Northern Ireland had caused, especially the generation between 16 and 20, may rekindle the violence in the course of the impending Brexit. In his opinion, the recent murder of journalist Lyra McKee was a tragic indication for his apprehension.

Films about the history of the GDR and the 1990 change proved very popular among the Schwerin audience members. On the latter subject, Peter-Michael Diestel, the last Minister of the Interior of the German Democratic Republic, was a guest at the festival. Bernd Böhlich, the director of SEALED LIPS, and his film team were also pleased about a crowded cinema hall when their drama film about a young German communist who had been wrongfully convicted under Stalin in the USSR celebrated its German premiere as part of this year’s feature-film competition. Böhlich was accompanied by actresses Swetlana Schönfeld, Barbara Schnitzler, Carlotta von Falkenhayn as well as their fellow male actor Peer Jäger. A large audience moreover attended the screening of Evelyn Schmidt’s DEFA films THE BICYCLE (1982) and ESCAPADE (1980) in their recently digitised editions. The 29th FILMKUNSTFEST MV also commemorated Heinz Brinkmann, one of the festival’s co-founders, in a special In Memoriam screening of his documentary film FALLWURF BÖHME. Heinz Brinkmann passed away on April 4th, 2019.

The topic of this year’s Film Industry Conference, hosted by FILM COMMISSION MV on May 2nd and attended by some 100 spectators, was the current status of film and media promotion in Mecklenburg-Western Pomerania, a topic Minister President Manuela Schwesig also addressed during her speech at the opening ceremony. Along the intended institutional restructuring for film promotion, the representative of the state also announced a newly established cinema award for outstanding and high-class film programmes in cinemas in Mecklenburg-Western Pomerania. 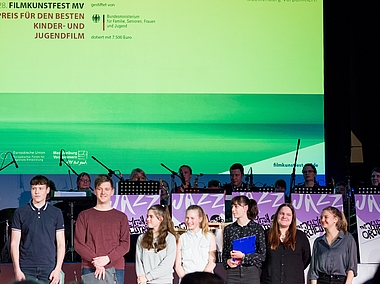